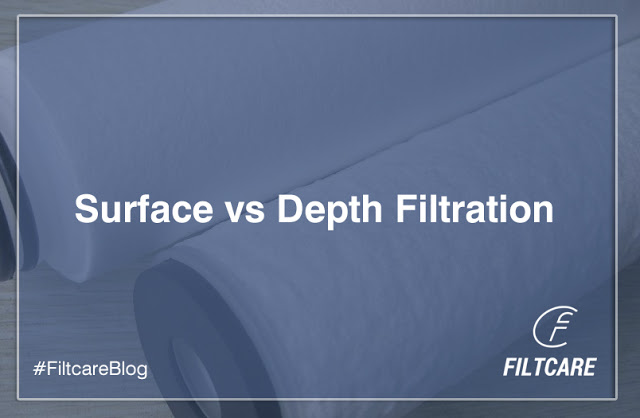 It has been stated that a filter medium is a porous (or at the very least semipermeable) barrier placed across the flow of a suspension to hold back some or all of the suspended material. If this barrier were to be very thin compared with the diameter of the smallest particle to be filtered (and perforated with even sized holes), then all the filtration would take place on the upstream surface of the medium. Any particle smaller than the pore diameter would be swept through the pores, and any particle larger than that (assuming the particles to be rigid) would remain on the upstream surface. Some of the larger particles, however, would be of a size to settle into the individual pores and block them. The medium surface would gradually fill with pores blocked in this way, until the fluid flow reduced to below an acceptable level. At this point filtration would be stopped and the medium surface would be brushed or scraped clean (although many automatic filters have their surface continuously brushed or scraped).

This filtration mechanism is termed surface straining, because it works entirely on the relation between the particle size and the pore size in the screen. Unless the particles are easily deformable, then surface straining will separate solids in the feed suspension absolutely on the size of the pores in the filter medium. This mechanism is that working in screening through a perforated plate or single layer of woven wire or plastic mesh of precise weave. It also applies in the range of metal edge and similar cartridges where the ‘ pores ’ are actually precisely formed slots between adjacent discs or turns of a helical ribbon.

Most real media are, of course, not infinitely thin, but have a finite thickness in the direction of fluid flow, while most pores through such material vary in diameter along the fluid path. A second mechanism, termed depth straining, then applies when a particle moves through a pore until it meets a point where the pore is too small, and the particle is held entirely because of its size. The pore then is blocked, and remains so until the filter medium becomes too clogged in this way for it to have any further use. At this point it must be discarded, or, preferably, blown free of the trapped solids, by a reverse flow of fluid.

In the same way that particles can be trapped in a bed of fibres by the adsorption processes described earlier, so can fi ne particles moving through a tortuous path imposed by an irregular pore be trapped on the pore surface by the mechanisms of direct or inertial interception or diffusion. This process is known as depth filtration, and is shown in below figure. Pore blockage also occurs with this mechanism, as particles become trapped to one another, although no pores become absolutely blocked, because the fluid can still flow through the spaces between the particles. As before,

a completely clogged medium would need to be discarded or cleaned by reverse flow (or perhaps chemically). 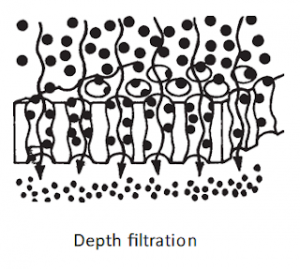 In practice, the effects of depth straining and depth filtration are effectively the same the medium clogs because of particles trapped in the pores – and difficult to tell apart, so both mechanisms are usually grouped together under the title of depth filtration.

Where solid concentrations are higher, as is the case with a large number of process separations, a different mechanism is called into play, which is the development of surface straining. Now, because of the high concentration of solids in the suspension, the particles jostle with one another at the entrance to each pore and, after a very short period when some small particles escape through the pore, the particles bridge together across the opening to the pore. These particle bridges then act as the filter medium to allow layers of particles to form upstream of them and the fluid to flow through these layers to be filtered. The build-up of particles on the filter medium produces a cake of separated solids, and the mechanism is termed cake filtration ,with actual separation by depth filtration within the thickness of the cake, and surface straining on its upstream face. This mechanism is illustrated in below Figure 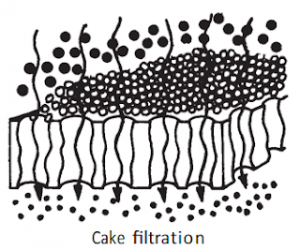 Cake filtration presents complicated problems because the cake can be more or less compressible under the force of the pressure differential across the cake. Some clarification processes do employ cake filtration – such as exhaust gas cleaning in bag houses or the treatment of some dilute liquid slurries in bag filters – where the accumulated cake is usually blown free from the surface of the bag by means of a reverse flow of fluid.